Assam State Film (Finance & Development) Corporation (ASFFDC) has dedicated itself to the development of its Multipurpose Cultural complex 'Jonakee' that shall house the state's first and only film museum. Hon'ble Chief Minister of Assam inaugurated the first ever film museum of the state on 29th December, 2013. Eminent film personality Sri Amol Palekar also graced the occasion as a special guest.

The museum not only comprises a Photo gallery but also display Cinema posters both from yesteryears and contemporary films, and it also gives a detailed history of the state's film industry and information on development of cinema.

Projection of a film on the history of Assamese cinema will be a part of the daily activities of the  museum as well. That is not all, a collection of cinema garments and old film equipments like film projectors, camera, sound recording machines, old musical gramophone records are other important features of the museum.

There are altogether 7 TV screens inside the Museum-

Here visitors will get a glimpse of the important events in the Assamese film industry which also displays information on the first Assamese Film "Joymoti".

A Film Archive has been completed  under guidance from Sri P.K.Nair, Ex Director,National Film Archive of India, Pune and inaugurated by Hon’ble Chief Minister of Assam,  on February 12,2011 at the Multi Purpose Cultural Complex at Panjabari under Assam State Film (Finance & Dev) Corporation Ltd (ASFFDC).  About137 films prints are presently preserved in the Archive 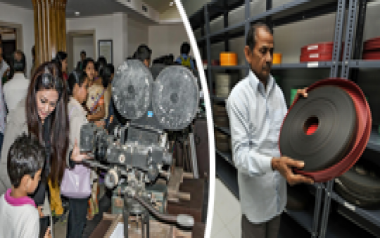